Years ago, in what seems like a former lifetime, an acting teacher taught me that when accidents happen, they are gifts that give you the opportunity to create something you never would have otherwise… whether that be on stage or in real life.

Back in September, I purchased a Michron from Alpine Labs. It’s a great tool that connects to DSLR cameras to control the shutter and create time-lapse video or long exposure stills. I actually only wanted it because I could program it to leave my shutter open for over 30 seconds to capture some long exposure images in the dead of night. I really wasn’t planning on creating any time-lapse videos.

On my first time out in the woods shooting photos in the dark, I must have dropped a cord when I was packing up because the next time I went to use my Michron, I couldn’t find one of the 2 cords that comes with the unit. I hopped back onto Alpine Labs’ website and ordered a replacement cord. I told them that I was on the road needed the cord shipped out to my location pretty fast because I was going to be leaving soon. Their excellent customer service jumped on it and shipped it out almost immediately.

Now, the cord that I ordered was a short black cord, maybe 6 inches long, that I was expecting to arrive in a small package. When a large cardboard box arrived with a return address of Alpine lab, I wondered if they got their packaging skills from the potato chip companies who’s bags are filled with more air than chips.

But instead of finding a small black cord, I opened the box to find 24 plush Fruit Ninja watermelons. Each watermelon came with 2 halves that stuck together with a single piece of Velcro… not to mention their ninja masks. 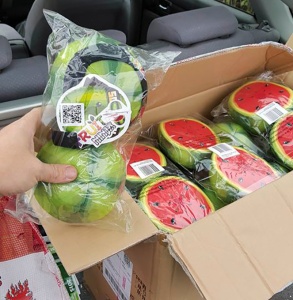 I quickly took a picture and emailed Alpine Labs “Was this a joke? Why did you send me these?”

Brendan at Alpine called me as soon as he got my email. He was just as perplexed as I was. Long story short, the warehouse they use to store and ship their time-lapse gear had a mental-lapse (see what I did there?) and somehow these ended up getting sent to me. Brendan and I laughed about it… a lot. And he promised to overnight a new cable to me right away. I promised him that once I got the cable, I’d make a time-lapse video of the watermelon.

Lucky for me this all happened around Halloween, so I didn’t have to find a costume, I had no choice but to become a Black Market Plush Watermelon Dealer! 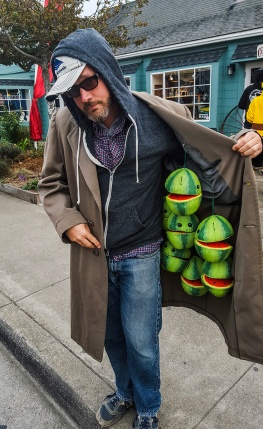 As my friend Marian said when she heard the story of this costume, “That is some delicious lemonade.”

Then I spent a few days running around Fort Bragg, CA, trying out the Michron and learning how to make time-lapse videos. The way I learn most things is by doing it over and over again. I ended up with enough tests shots to make a 40 second video. I felt the video needed some music, so I Googled “Watermelon song” and found a great artist, Tom Rosenthal, who I am now a fan of… not only because he gave me permission to use his music, but I really like the rest of his work. Check him out.
And now, here’s the Watermelon Time-Lapse Video!

And if you’re wondering, my plan for the watermelons is to find a toy drive to drop them off at in December in hopes that they bring children in need as much joy and as many laughs as I have had since I received them… oh, and I sent one to my nephew as well.